A fast-rising bharatanatyam dancer, Meenakshi Srinivasan, has composed  Sita’s Agni Pravesham, which I consider as one of the extremely well-conceived items. First is the selection of a sequence which has tremendous dramatic potential, comprising in a way a whole philosophy on the treatment meted out to women in a patriarchal society. The selected Sanskrit verses from Valmiki Ramayanam translated into Tamil by a scholar and the nuanced music composed by Hariprasad provide the right foundation. And Meenakshi’s interpretation preserves the poignancy of the episode by not exaggerating and without any didactic padding, allowing the moment to speak for itself. The concluding circumambulation of Sita by Agni, who tells Rama that his flames cannot ever touch or purify someone as blemishless as Sita, says it all. The segment from an ancient epic has a message as relevant for women’s empowerment today as then. And this is the way to underline the eternal present in myth and epic. This is the direction in which classical dance should spread.

Madhuram Madhavam - a treat for the connoisseur

It might be early days yet, but Meenakshi Srinivasan's Bharatanatyam recital will go down as one of the 'picks' of the season. Welcome to the newest star on the horizon!
Meenakshi is a disciple of Alarmel Valli, and has imbibed her guru's vitality and energy. But it was not just Meenakshi's dance that sizzled that day. It was a coming together of a poetic script, fresh and coordinated orchestra, an excellent choice of pieces and a performance par excellence, that turned 'Madhuram Madhavam' into a connoisseur's event.

"Meenakshi excels in this art and represents for me nothing less than grace personified!"

Translated from French-
I discovered Meenakshi Srinivasan during a dance performance at Musee Guimet in February. In the intimate space of this auditorium, I experienced a moment of pure bliss watching this very beautiful dancer who enchanted us for close to two hours, without a break...I arrived at the theatre without any prefixed ideas and without being already sold at the outset, but I was literally seduced by Meenakshi's enchanting charm...From one item to the next, during the five pieces she presented, Meenakshi played different roles and drew us into the scenes / situations which she played to perfection. For me, Bharatanatyam is one of the most majestic dances, with strict aesthetic codes, an extreme precision in the movements and a certain finesse in its execution. Meenakshi excels in this art and represents for me nothing less than grace personified!...

Standing ovations at both performances at Guimet, proof that I wasn’t the only one to be seduced! -Mylene

Translated from French-
This young and brilliant dancer, still little known in France, dedicated her recital, Madhuram Madhavam, to the love for Lord Krishna by depicting the devotion of three different literary characters for this well-known deity who is one of the avatars of Vishnu.
It featured five musical and choreographic compositions……In each of them, Meenakshi Srinivasan dazzled the audience with her technical virtuosity, grace and very human sensuality in the adoration of Krishna. In perfect harmony with her musicians, she seemed to effortlessly move from one item to the next with great ease, both in the rhythmical as well as expressive parts.
-Annie Dalbeira

Translated from French-
This recital, titled Madhuram Madhavam, had five parts and was dedicated entirely to Krishna...The fluidity and beauty of the choreography was amazing...Moving a microphone towards the centre of the stage, the dancer presented the Varnam, the centrepiece of the recital... in almost impeccable French...The audience was enthusiastically asking for more, so the dancer and the musicians presented an extra item...Despite the physical effort it must have required for a dance recital of two hours, the dancer did not at all seem fatigued during the rhythmical passages in this extra item. - Joel Riou

Brilliant all the way
V.P. Dhananjayan is all praise for Meenakshi Srinivasan.
Friday, Dec 11, 2009, The Hindu

It's not often that we witness an evocative natya performance, endowed with all the essential qualities required for an artist. Meenakshi Srinivasan's execution of nritta (pure dance), nritya (expressive dance) and natya (drama) were all in measured brilliance bringing credit to her guru Alarmel Valli.
Calm, poised and peaceful...the rasikas went home with these feelings that evening...

Stage presence along with a capacity for deep involvement are the apparent hallmarks of Meenakshi Srinivasan's Bharatanatyam recital, as witnessed at the India International Centre in New Delhi. Trained under Alarmel Valli, Meenakshi has evolved while imbibing her guru's grace, but happily without trying to be a clone of the teacher's style and approach... That the audience was with the dancer was obvious.

High degree of sophistication
Vidya Saranyan - The Hindu, Chennai - May 6, 2010

On the inaugural day, the motley crowd could hardly miss the burning zeal and the high degree of sophistication of Meenakshi Srinivasan's Bharatanatyam. A disciple of Guru Venkatachalapathi and subsequently Alarmel Valli, Meenakshi has established a reputation for sincerity and expertise with her performances around the world.
The programme planning and performance seemed to target the temple audience and factored in the absence of trappings such as the stage and curtain. Her recital that day revolved largely round Lord Siva and His consort. Abhinaya and nritta were given a balanced treatment. What stood out in Meenakshi's performance was the ability to create, communicate and sustain a particular mood without a single wrinkle.

In recent times this writer attended a series of neo-classical (or modern or contemporary or theme-based) Bharatanatyam (BN) programmes. While he certainly appreciated the novel attempts to introduce a fresh life into the ageing world of BN, he became nostalgic and yearned for a change - from the new to the old! So when Meenakshi Srinivasan... Informed him that she was going to do the Margam at her NCPA engagement in Mumbai on October 27, 2009, it came as a big relief. And relief it was because of the exemplary manner in which she carried the flag of the traditional format to an appreciative audience.
The characteristic features of the Pandanallur style were brought out even at this early stage giving an inkling of what was to come later...The varnam was interpreted in both ways to evoke rati and bhakti sringaras. Viraha was woven in subtly. Nataraja’s different poses, held without any tremors in the body, were like what we see in temple sculptures.  The footwork was flawless. One was reminded of her guru’s statement that abhinayam does not mean only facial and body expressions; it calls for footwork also for keeping track of the rhythm... One hopes Mumbai can see her more often.

A delightful dancer... All the virtues of internalized bhava and netra-abhinaya. Clean lines, fine rhythm and introspective stillness stemming from a tranquil centre make Meenakshi a lovely dancer worth watching.
Leela Venkatraman - The Hindu, New Delhi

"to see sensuousness combined with abject geometric precision is to watch the dance of Meenakshi Srinivasan. Just as music and dance combine to create energy and calmness, her mastery over nritta and the almost subtle but unmistakable emotions on her face , blend to produce a sequence that makes you sit up and take notice. While she is able to inject in her dance an energy that does not seem labored, she also brings to her chosen items an inner power that moves the artiste to the core taking the audience along. And if there is a silence or pause in the dance, it is also a moment of equipoise before the next movement"
Chitra Mahesh - Deccan Chronicle, Chennai

"We are living in an age of aggressive over-statement, a feature which seems to have invaded every aspect of the performing arts. Meenakshi Srinivasan’s performance was refreshingly minimalistic... The dancer’s performance was like the intimate relationship between dance, music and sculpture. The recital was so perfect that it needed no extraneous embellishments. The power of communication and the sensitivity of her artistry enriched her rendition..."
M.Surya Prasad - Deccan Herald, Bangalore

"One of the main things about seeing Meenakshi Srinivasan perform is the taking for granted of the supreme quality and dedication to the dance form of Bharatanatyam she provides.
Every part of her being is involved in the way she dances- from the way her hand movements remain in perfect sync with her body and in the way her nritta hardly ever falls short of the percussion accompaniment."
Chitra Mahesh - Deccan Chronicle


"The magic in her eyes"

Meenakshi belongs to a league of highly exalted performers. She makes you forget time and space with her art. To reach this level of sublimity, it takes a lot of investment from the dancer and the rasika. Very few can help transcend this binary and show how the dancer becomes the dance itself.
Veejay Sai - Narthaki.com 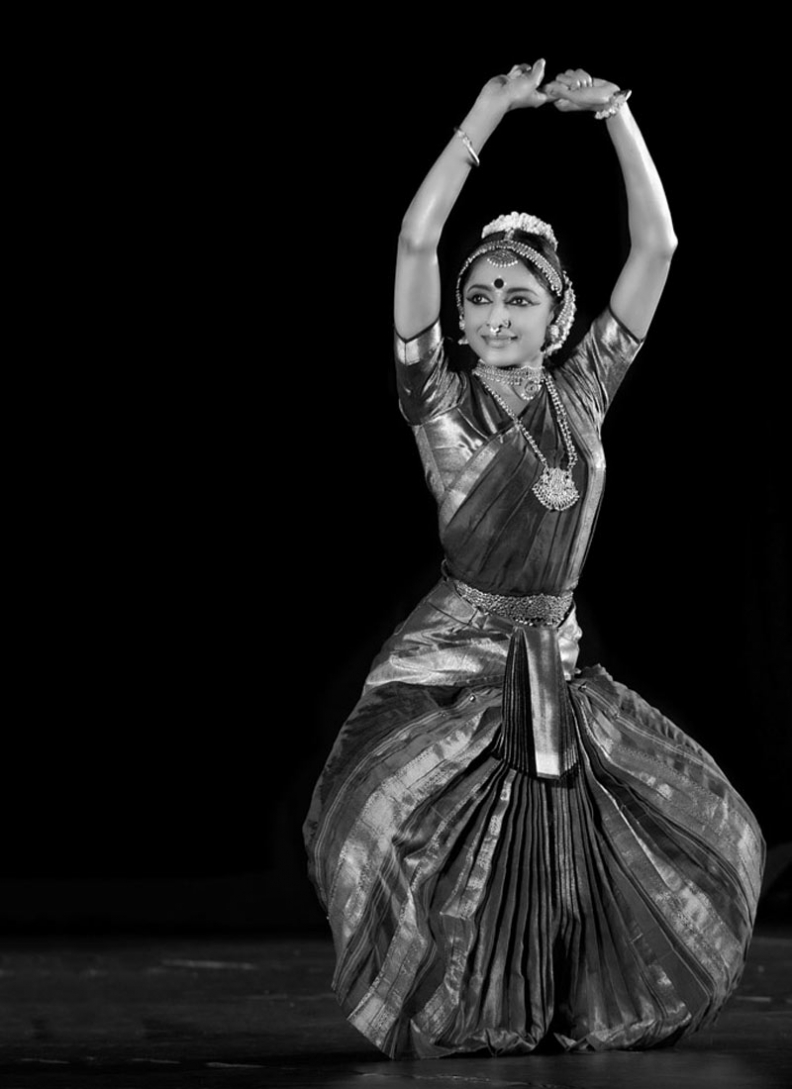